You are here: Home / Industry Updates / Alzheimer and Memory palaces 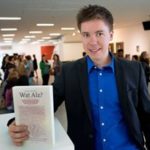 Memory palaces to improve quality of life in Alzheimer’s disease

Abstract. Dementia is the problem of the future in health care. Dementia is hard for the person living with it, but even more burdensome for his/her environment. The conversational dialogue between them seems to decline. The loss of recognition and contact is the most difficult to bare. For the elderly adults, retrieval of proper names is a source of unease and distress. This naming deficit is an early symptom of patients coping with neurodegenerative disorders such as Alzheimer’s disease (AD). Individuals with Mild Cognitive Impairment (MCI) are at great risk of being in a prodromal phase of developing Alzheimer’s disease. Memory enhancement training is an upcoming intervention in the field of Neurology and Geriatrics. These interventions have already proven to increase cognition in individuals with Mild Cognitive Impairment. Yet no studies have attempted to combine two powerful communication strategies (i.e. Method of Loci and Face-Name mnemonic) with virtual reality to improve the memory of significant others. This study has the ambition to optimize these communication strategies by externalizing and customizing memory palaces for subjects in the early phase of AD. We have developed a mobile application which allows caregivers to construct virtual scale models of the residential settings these individuals presently are living in. These models function as memory palaces in which photos of significant others are connected to the architectural, spatial environment. The application can function as an audio-guide through a well-known environment and subjects in the early phase of AD can make the walk together with a caregiver or a family member. Thus (augmented) reality supports and facilitates participants during their familiar walk along the loci route. We hypothesize this to be a convenient instrument to reaffirm the diminishing dialogue between subjects with dementia and their surroundings by positive storytelling. The first testing results are promising. At follow up we expect an increase in quality of life for subjects in the early phase of AD and their significant others.

Alzheimer’s disease (AD) is the most common primary neurodegenerative dementia and a growing public health problem 1 with costly consequences for patients, their families and society 2,3. Selective memory impairment and dementia are the primary clinical manifestations of AD 4. In the last decade, behavioral interventions for improving the functioning in AD have increasingly been explored 5,6.

Mild cognitive impairment (MCI) is an intermediate state between cognitive changes of normal aging and early dementia, AD in particular 7. 20–50% of individuals with MCI will develop dementia over a period of 2–3 years 8. Therefore MCI may be a key period for providing interventions to stimulate brain plasticity and decrease cognitive symptoms 9,10.

Persons in the early phase of Alzheimer’s disease have a particular sensitivity for losing their ability to recognize faces 11. This has a negative impact on their own quality of life and of their significant others. Recent studies however, clearly demonstrate the feasibility of virtual reality technology to improve memory and functionality of daily activities in the early stages of AD 12-14. The common feature of these innovative approaches is to endeavor to relate to aspects of the persons’ everyday life (using interactive digital photographs of the patient and his/her surroundings) and to tasks designed to be relevant to activities of daily living 15.

All participants are Flemish individuals in residential settings, diagnosed as subjects in the early phase of AD according to clinical criteria.

The pilot study consists of a study population of 10 individuals diagnosed as subjects in the early phase of AD according to clinical criteria. 5 control subjects and 5 subjects who comply with the intervention. The control subjects use a placebo-application. The full study is an analogue study with a larger sample size. In order to achieve a well powered study we construct innovative software packages based on memory palaces (patient friendly and accessible to a broad and increasing segment of the population).

The Method of Loci (MoL) and the Face-name mnemonic (FNM) have proven to be two successful communication strategies to improve episodic memory for MCI subjects. The effectiveness of these mnemonics is largely due to their appeal to brain structures that are rather well-preserved in the course of the disease. Our study will examine the efficacy of the MoL and the FNM for subjects in the early phase of AD in combination with photographs of loved ones in familiar virtual environments. We have developed a mobile application to reconnect individuals in the early phase of AD with their environment through positive storytelling.

Current findings indicate that the MoL is an effective and well-studied strategy to improve memory for the elderly 16-17, even when coping with MCI 18. Further, this mnemonic technique has proven to be a valuable and therapeutic instrument to treat depression 19. Application of the MoL involves three components 20: selecting and memorizing a series of distinct loci along a familiar pathway, creating an image for each item to be remembered and placing images of the items in the selected loci. During the recall phase, the loci pathway is mentally retraced so that the images to be transformed into corresponding verbal items are found.

Recent studies confirm the efficacy of the cognitive training program for MCI subjects regarding face-name associations 21-23. Application of the Face-Name mnemonic consists of three phases 24: identifying a prominent feature of the individual, recoding the individual’s name as a high-imagery keyword/name clue and connecting the keyword and prominent feature in an interactive image. Proper names are both arbitrary and meaningless and therefore more difficult to recall. The success behind the FNM is to add meaning. This communication strategy builds a retrieval path leading from a pictorial stimulus to a verbal response.

Our intervention combines the effectiveness of both the MoL and the FNM by anchoring familiar faces to specific reference points in the known environment. The mobile application allows caregivers to construct personalized and externalized memory palaces, in close collaboration with the subjects in the early phase of AD. Together, they upload photos of significant others, link them to real-life objects and they formulate a loci route across the residential setting. At regular intervals, participants are invited to complete the walk in real-life together with the caregiver or with a family member. The application has a guiding function and also invites participants to tell positive stories about significant others.

Studies indicate that subjects in the early phase of AD mainly have difficulty with mnemonic strategies that involve ‘abstract thinking’ 25. Therefore the technology, which uses augmented reality to externalize and personalize the memory palaces, functions as a facilitating support rather than an additional difficulty.

Our intervention is non-pharmacological, rather inexpensive, patient-friendly, unconventional and easy to combine with regular treatment of Alzheimer’s disease. The first testing results reveal a decrease of disorientation in the participants and an increase in connectedness between caregivers and their family members.

We propose these memory palaces to be relevant instruments to strengthen the quality of care in residential settings. We hypothesize that the postponement of the naming deficit in the early phase of AD will have a positive impact on the activities of daily living, resulting in more independence and reduced costs for society. We expect this shared activity of positive storytelling to reaffirm a dialogue that seemed to diminish between subjects in the early phase of AD and their significant others.

The primary objective of this study is to examine whether the addition of (augmented) reality to communication strategies (MoL, FNM) can reconnect subjects in the early phase of AD with their caregivers and family members.

The secondary objective of this project includes a follow-up on recall and recognition of familiar faces. As well as a follow up on quality of life of subjects in the early phase of AD and their significant others.

To date, no study has combined the MoL and the FNM with augmented reality to restore the communicative dialogue between subjects in the early phase of AD and their significant others. The mobile application generates a shared activity through positive storytelling. It is also an innovative and an unusual insight to transform the actual residential setting of subjects in the early phase of AD into multisensory memory palaces.

This research suggests the therapeutic value and rehabilitative possibilities of augmented reality in medical technology. Externalizing mnemonic techniques into the real world can be a future step in connecting healthcare with technology.